Or if you cloned this repo, it’s already here:

You need at least Version 2 of the esptool utility, and a USB port.

Plug the board in to a USB port, and check for a device called /dev/ttyUSB0 or /dev/ttyACM0 or similar. If all else fails, check dmesg for USB events.

From a terminal, first add yourself to the group ‘dialout’ (or whatever group owns the device):

And then install esptool:

Your device is called something like “/dev/cu.something” depending on the type of device. When you find it, set up an environment variable so we don’t have to keep typing it:

If you can’t find any devices which look like that, you need to install third-party “VCP” (Virtual COM Port) drivers for your device. Typical locations:

Once you’ve done that, the device should appear in /dev.

Run the installer, make sure “Add Python 3.6 to PATH” is selected (at the bottom) and then click Install Now. 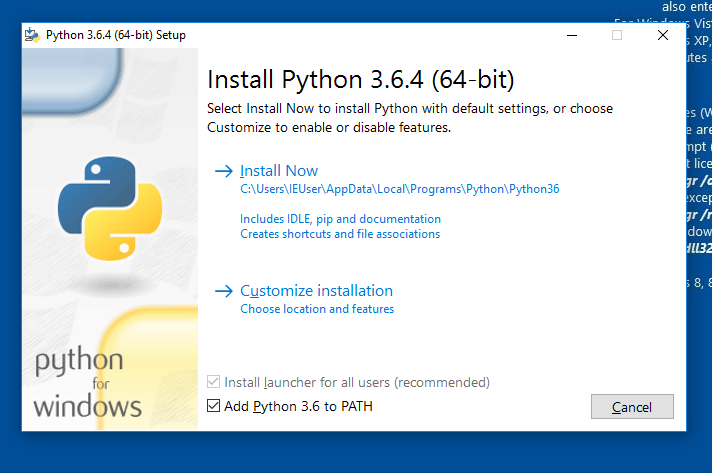 Your device is called COM3 or COM4 or something along those lines. You can find the correct COM port a number of ways.

Or have a look in Device Manager under “Ports (COM & LPT)” for a familiar name. 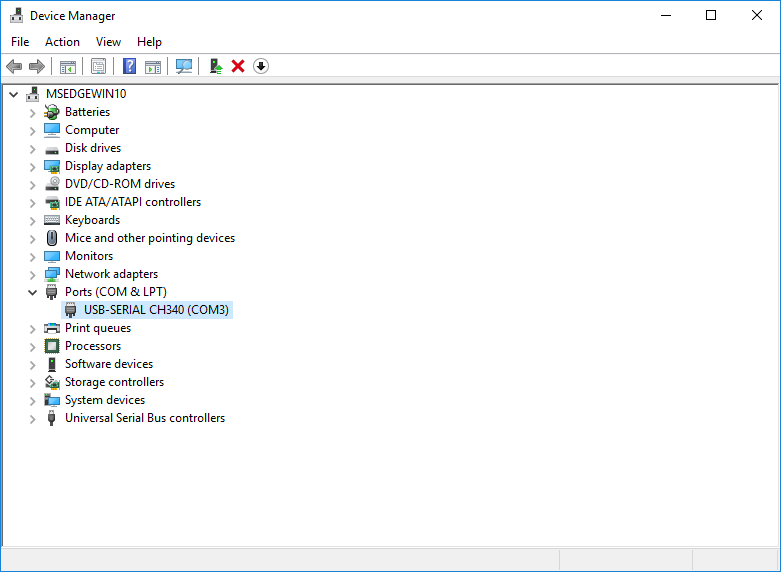 If you can’t find any devices which look like that, you need to install third-party “VCP” (Virtual COM Port) drivers for your device. Typical locations:

Once you’ve identified your serial port, you need to upload the firmware image you downloaded in step 1. In the commands below, $PORT is the port you identified in step 2.

First check that you can communicate with your device:

For esp32 (note: the offset is different):

Note the different offset used for ESP32. You can try faster baud rates if you wish (eg: 230400, 460800), the firmware will load more quickly but reliability varies.

Use ‘miniterm.py’ which is part of pyserial, and installed at the same time as esptool. Use the port name you worked out in the previous step. MicroPython standard builds use 115200 baud:

You can now chat to Python at the REPL.

miniterm.py is available and works at a pinch, but its terminal handling is not good. If you have the latest linux subsystem for Windows you may be able to use the instructions above (look for /dev/ttyS3).

If you’re configuring an ESP8266, you may be able to put up with it long enough to get WebREPL up and going (see WebREPL and WebPad)

Otherwise, I’ve successfully used ‘PuTTY’ which is available from http://chiark.greenend.org.uk/~sgtatham/putty/latest.html

Run PuTTY, select ‘Connection’ ‘Serial’ and set the serial line to the previously identified COM port number (e.g. COM3), the speed to 115200 and Flow Control to None: 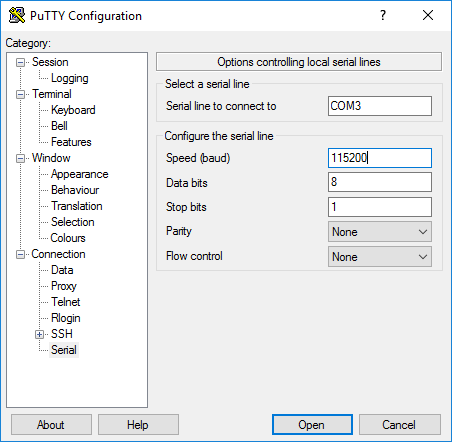 Go back up to “Session” on the lefthand menu, check “Serial” on the right, then click “Open”. You can then give your session a name ‘com3’ and click Save so you don’t have to do that all again next time. (Note that COM port numbers can change unexpectedly in Windows and you will then need to change your Putty saved settings.) Yes, the user interface leaves a lot to be desired: 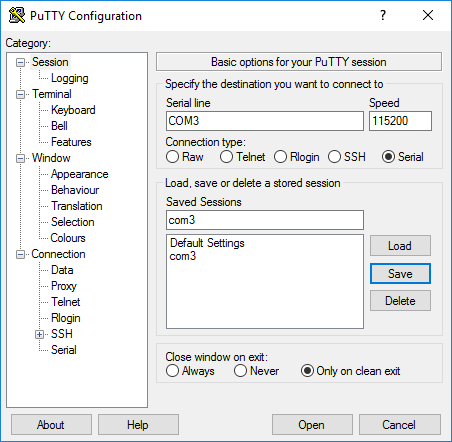 Micropython exposes this via the ‘network’ library. To get your device talking on the network, do the following

That last command returns a tuple of (IP address, netmask, gateway address, DNS address). Note down your IP address … we’ll use it later.

Note: some corporate wifi systems are not easy to connect to, if the connection doesn’t seem to be working try connecting to wifi on your phone or a small network you control.